2003 World Cup winner and English Rugby legend, Jason Robinson has sympathized with Elliot Daly, in lieu of the recent red card and a 3 week ban handed to him after England’s game against Argentina just last weekend at Twickenham. 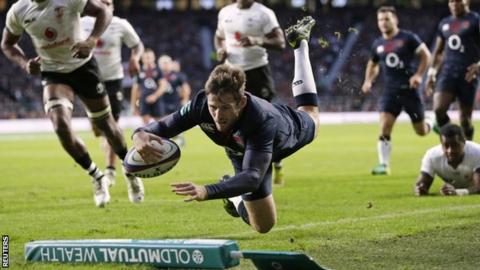 Robinson, who during his union career days, had played with huge distinction at the full back position and on the wing, also attributed Daly’s mistimed tackle to lack of experience in the position.

Wasps centre Daly, had taken out LeornadoSenatore in the air, thus causing the player to land on his head.

Daly had been selected to play out of his position on the left wing, for a second time by Eddie Jones, after he had shown an impressive display against Fiji.

Robinson also believes that the red card handed out to Daly was as a result of his lack of game time and training on the wing. He thus urged Coach Jones to look more critically at his selections from henceforth.

“Elliot is skilful, he has got a massive boot on him and he does add a lot, but there is more to being on the wing for England.”

Robinson however believes that the incident was accidental and not an intentional one, so it was wrong to have dished out a red card to Daly as a result of that.

He also went on to defend Daly and sympathize with him, hoping that the Wasps centre serves his time, learns quickly from his mistake, and comes back a lot stronger.